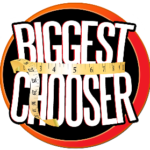 1) To say the competition is off to a rousing start would be an understatement. In over the 10 years, we have held the event, never have more teams come out of the gate with this weight loss rate. Janice Hirsch’s Turquoise Machine leads the way with a 1.66% points weight loss ratio, the second greatest in week two history. Hot on their heels are Philip Williams’ Black Attack weighing in at 1.62% points lost, ranking them in the top ten all-time for week two results. Williams added, “Those results will change in week three.” Let the rivalries begin!

3) Biggest Chooser leader and our Granite Falls Fitness Director Sarah Roskilly has a fascinating background. Born in Morpeth in Northumberland, Sarah was a true English lass from the start. She grew up active and fit and as a teenager, she met the legend, Muhamad Ali. She recalls. “I made my mom drive me to Newcastle airport in 1977 because I was such a big fan. He came right over and shook my hand!” From Newcastle to Rolesville, Sarah has brought her passion for fitness to our corner of the world.

Stay tuned for our weekly updates and results. Happy choosing!

Discover the Benefits of Membership at Granite Falls.